Fingernails2Go is becoming an international brand. With a distributor network being established in Spain, we spoke to Andrés Escarpenter, an experienced businessman with a long history of working both in Spain and other markets, and Elena Tamarit, former Creative Manager at fashion brand DeFacto for the Accessories Department. They are both part of the Nail Fashion Machine SL company, together with Juan Tamarit and Rosa María Rovirosa. 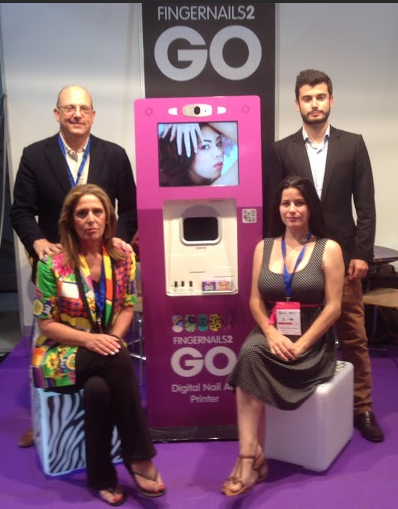 Hi Andrés. Tell us a bit about yourself, what’s your business background?

The majority of my career has been in real estate. I have been the Spanish CEO for the 2nd largest real estate consultancy in the world for the last 25 years, buying and selling property, particularly within Spain, Portugal and North Africa.

Hi Elena. What about you?

I have always worked in the Fashion Industry, having studied at Istituto Marangoni in Milano. I have worked for Custo Barcelona, Carolina Herrera and until recently with DeFacto. During my career, I have travelled all around the world to visit manufacturers of accessories and beauty fairs both in Europe and Asia.

How did you find out about Fingernails2Go?

Elena: Last year, during my travels to Korea, China, Japan and Hong Kong, I found out a growing trend of girls printing their nails with a “nail printing machine”. As I found the concept to be new and non-existing in Europe, I started to contact Chinese and Indian manufacturers, but found many issues with importing their goods to Europe because of the strict existing regulations. During one search, and due to my search history in Google, Fingernails2Go appeared on my Google page and we really liked that they were partnered with HP, so we contacted them for a meeting in Lisbon.

After doing some extensive market research in Spain, we decided to go ahead with the partnership with Fingernails2Go as we believe it’s a great business opportunity and investment. The market for nail art, manicures and nail decoration is growing rapidly, and the kiosk is perfect for women of all ages.

Was your decision to partner with Fingernails2Go made easier with the involvement of HP?

Yes, absolutely. HP are such a well known brand, with a history of innovation and expertise in printing. We feel that if it had been a less reliable manufacturer we wouldn’t have had the same confidence to close the deal with Fingernails2Go as we did with HP and Tensator being their partners.

Where do you see the main opportunities to place the kiosks?

We see numerous opportunities for placement of kiosks. Evidently locations where there is mass traffic. We plan to initially start placing kiosks in large shopping centres. Once we get them out into the market we are confident that the customers will tell their friends through social media channels, and there will be great excitement when they learn what they can do with their own designs and photographs. Our plan is to roll out the kiosks in retail hotspots, hotels, gyms and restaurants. It will be massive and I believe this could be the revolution in the nail industry as it enables consumers to get nail printing at affordable prices.

How have you found working with Fingernails2Go?

From the outset we have found Fingernails2Go a pleasure to work with. They are nice people, accommodating and are extremely enthusiastic with a great belief in their product. We are looking forward to building our relationship with the team and receiving the support we need to make the kiosks a success in our retail destinations as it is critical for the growth of the product and brand.

Do you feel there are opportunities to target specific events within a country? For example; football matches?

We believe the opportunities with the FN2G kiosks are immense, particularly within event driven markets. A great example would be placing the kiosks in Milan for The Champions league final, one in the Real Madrid corner and one in the Atletico Madrid corner.  Fans could print team crests, players faces or the national flag.

What would you say to people that are thinking of getting involved with Fingernails2Go?

We think that we are at the beginning of the building of a worldwide brand. By supporting each other and with the marketing support to grow the brand awareness, this is going to be a great business opportunity.

Printing intricate designs, patterns onto fingernails or a full set of artificial nails in just seconds, Fingernails2Go is the newest innovation of the nail industry! To find out more check out our website http://fingernails2go.com/